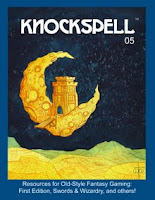 The Review:
This is a really fun periodical and I look forward to new issues being available. It reminds me of the D&D magazine I used to read back in the 80s and is filled with the same kind of material. Interesting articles, new monsters and spells, and a couple of neat adventures. I highly recommend spending the $5 for this PDF especially if you have an iPad or other E-book reader you can transfer your PDF to. Sitting with a cup of coffee and reading an old school gaming magazine is great.

Available in both print or pdf at the Lulu store (http://stores.lulu.com/mythmere)
or at RPGnow as a pdf: http://www.rpgnow.com/product_info.php?products_id=88793