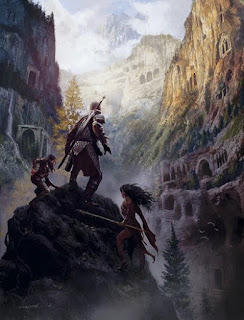 Since I mentioned Dungeonpunk in a rather dismissive fashion in an earlier post (and I am seriously spamming my own blog today), I thought I would point out that even WotC hits the nail on the head sometimes. This piece by Michael Komarck (called "The Caves of Chaos") was done for the WotC Players Handbook II. While it obviously doesn't correspond to the map of the Caves of Chaos in terms of what's portrayed in the picture ... I'd frankly be willing to make the map correspond to the picture, which I think absolutely rocks. There's something about doors carved into walls, and deep crags, and not-quite-straight architecture that really kicks loose my sense of imagination.

Even the fighter and the elven magic-user are okay in terms of not being too punked-out, although the naugahyde halfling could definitely go.
Posted by Matt Finch at 2:55 PM