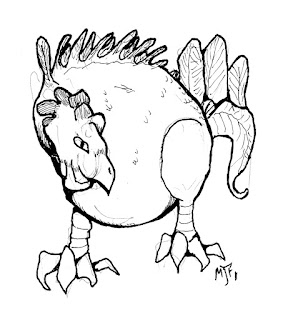 So I went over to Al's post at the Black Gate, where he provides a helpful list of what one should blog about today. It seemed like an odd list, but Al is an experienced blogger and no doubt knows what he's talking about, so I took out the dice and rolled a 7.

The cockasaurus is a giant rooster almost the size of a cottage. It has scaled skin rather than feathers except for a ridge of plumage running down its back and ending in a rooster's typical tail (albeit a tail almost six feet in length). Although the creature has a deadly bite, it must be feared mainly for its ability to deafen and paralyze opponents by means of its unbelievably loud crowing. At the beginning of combat, the cockasaurus crows, causing everyone within a close hearing distance to make a saving throw or be paralyzed with pain for 2d6 combat rounds. Even those making the saving throw successfully will be unable to hear for the same 2d6 rounds.

The cockasaurus will only crow once, at the outset of combat; the monster is too stupid to use the ability in a tactical manner - the crowing is merely instinctive.

Cockasauri are occasionally found in the company of 1d4 chickehemoths.
Posted by Matt Finch at 11:56 AM