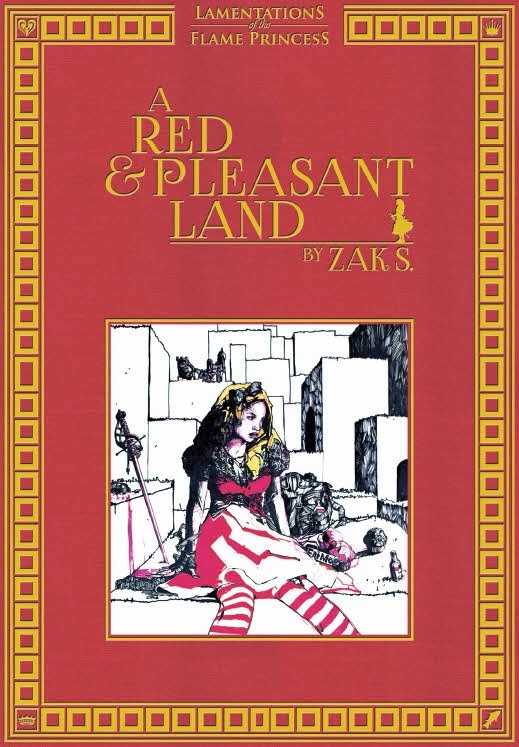 In my opinion, A Red & Pleasant Land by Zak S. is the best D&D supplement that has ever been written to date (2014).

The book is extraordinarily difficult to describe adequately, because it's based within material that has been done virtually to death in RPGs, fiction, and movies -- Alice (yes, the Alice of Wonderland fame) and vampires. Taking Alice's world and mixing vampires into it sounds like a ridiculous idea, simultaneously unworkable and hackneyed. Then, you know, if that wasn't enough, why not just set your artwork alongside John Tenniel's, and your prose alongside Lewis Carroll's. But oh holy shit. Zak's book not only works, it makes other things work: like explaining the existence of a megadungeon that's weird, rich, huge, and incomprehensible without using "mad wizard in Arthurian countryside."

Let me say, quickly, that I'm reviewing a copy that I paid for, and that neither Zak nor Jim Raggi asked me to write a review.

Just about the only part of the book I don't like is the character class of "an Alice," which is done much better than it sounds, but doesn't fit the way I like to run a game, which is why I don't like it. Members of the Alice character class aren't needed, so one can simply ignore that part if one feels as I do, or pay attention to it otherwise.

The writing is phenomenal and evocative. The underlying idea is brilliant. The art -- and I only occasionally like Zak's art for fantasy -- works perfectly. Indeed, the entire book is a piece of art as well as a gaming resource.

One other point about this book: there are a few things that some people will see as strengths, and that others will see as weaknesses, depending on how you're going to use the book. Any gaming book has to find the right balance between the "table reference" use and the "enjoy reading the book" use. As Lewis Carroll does, so does Zak mention several important points as if they are asides, irrelevancies, or afterthoughts. It makes the book read very much like Lewis Carroll (and also like Gary Gygax) to encounter comments like, "If characters in Voivodja are, in the course of any adventure in Voivodja, ever looking for evidence of any kind of misdeed and happen to kill a pudding, the proof will be in the pudding." There are any number of important facts buried in the text to be encountered chronologically by a front-to-back reader, but somewhat hidden from the at-the-table DM who needs to find the answer to a specific question. A gaming book must be readable in the first instance, for if the DM puts it down as a book it will never be played as an adventure in the second instance. Zak had to make choices, and the 6x9 format makes it difficult to meld readability with reference quality. When you run this, you'll forget important things that Zak wrote: if you think this would make you a poor DM, or an inaccurate conduit for Zak's sage wisdom, or create undue complications, you aren't going to work well in this sandbox. This book is for people who (like Lewis Carroll's characters) consider themselves quite the author's equal when it comes to interpreting the author's work.

In other words, you're going to have to read it, assimilate it, and then be willing to make up all kinds of stuff once you start running it. It's not a module, it's a campaign setting, so it can no more be played out of the box than the old World of Greyhawk folio. It's about as user-friendly as the original JG City State of the Invincible Overlord, which is to say, it isn't very. You simply can't have something that is both a perfect reference tool and at the same time evokes a sense of wonder. Check out the Cetology chapter of Moby Dick for an evocation of this tension. Zak had to make some choices, and some readers will applaud the same decisions others deplore.

A couple of other points. (1) I haven't read it as an editor, but I have not spotted any typos in this book. Not any. (2) The physical quality of the book is stupendous.

If you absolutely can't stand Zak's art, or if you simply can't consider a gaming product well-written if it leaves gaps, then you might not like this book. However, I strongly suspect that ARPL will actually show some people what "old school" writing looks like in the modern gaming age, why it was written like that in the first place, and how it is a valid contrast with more modern, codified, game-writing.

If you want to read what OD&D looks like in the year 2014, it is A Red and Pleasant Land. My hat's off to you, Zak, this is a masterpiece.