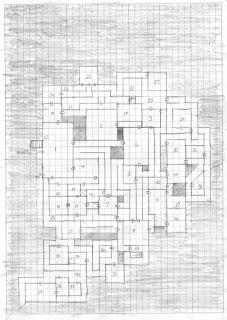 I present ... Goblinear Crag (second level). This was back from when I was 11 years old, discovered a few months ago in my parents' attic.
This is the second level of the dungeon - I realized that the first level is so small and lame because the party was headed directly for the second level, skipping the first. So, this level is actually a decent map. Obviously heavily influenced by B1. Later in the day, if I can make sure that a letter-sized graphic works on a blog, I'll post a scan of some of the key. The key is pretty funny, because it's so incredibly clear how much I was influenced by the Gygaxian writing style: "The room is devoid of detail other than the table and 9 sleeping furs."

From the comments to the earlier post, in which I asked others to list any other "when I was a kid" dungeons, here are other places to look:
Bobby's Dungeon
Alex Schroeder's Dungeon
Posted by Matt Finch at 8:58 AM