Commercialization of the Old School: Part 1

Commercialization of the “Old School Renaissance” Part I 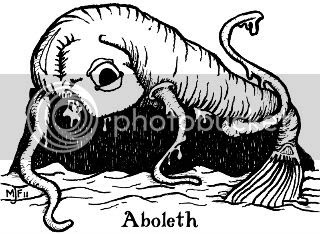 Is for-profit publishing an Aboleth?

A History of the Trend

First, just a disclaimer about using the term “Old School Renaissance.” For purposes of this post, please read that to mean “the effects of the increase in the volume of communication we have seen in the community of out-of-print FRPG gamers since the advent of the Internet.” When I use the term, I don’t freight it with any sort of moral imperative to buy things or donate things to that community, I just use it as the best currently available term to describe the effects of having the internet as a new vehicle for communicating with each other.

One of the effects of the internet on our community has been the emergence of “old-school” for-profit publishers. Early in the OSR (when Dragonsfoot was still pretty much the hub of the entire community instead of just the biggest of several venues), there was a big push to create free resources. Adventure modules and Footprints magazine were the flagships of this effort, but if you take a look at the archives of Dragonsfoot you will see a huge quantity of free material there.

The next step was the publication of Castles & Crusades, which was the first fully-commercialized old school venture. I don’t think that C&C made a long-term inroad into the existing community of old-school gamers, but I do think (from my own experience) that it pulled lots of disgruntled 3e gamers back into the old school community. I suppose, also, that Necromancer Games should at least get mentioned here too, since although they were definitely a 3e publisher they kept it in people’s minds that there was a “first edition feel” quite different from the official 3e “feel.” And that almost certainly helped pave the way for Castles & Crusades to scoop up people who were starting to decide that if “First Edition Feel” was so fun, “First Edition Rules” would be even more fun.

Then, a couple of years after C&C was released, and all right about the same time, three events moved things forward into the realm of actual for-profit production of gaming resources for the actual first edition rules. First, Rob Kuntz and Kenzer Games [note: this may have been Goodman] came out with adventures designed for AD&D, and charged money for them (I count that as two events). Rob Kuntz was the first, I think, with his Dark Druids module, but his first attempt involved getting people to send actual checks in the mail, so by the time he shifted to a realistic method of payment, it put him roughly in the same time frame as Kenzer’s module (which was a limited GenCon release). He gets props for being an early commercial publisher, but his impact didn’t really manifest until he switched to a workable internet business model. I recall him saying that he’d sold 14 copies of Dark Druids using the “send me a check” model – this might have been meant facetiously, but there’s no question that when he started taking paypal it also increased awareness in the community that he was writing again.

The third event, other than the two for-profit modules, was the publication of OSRIC. OSRIC was somewhat different from the modules in that it was a free product, but as a free product it was designed to foster publishing (whether free or for-profit). Because it was perceived as a huge leap into lawsuit risk, OSRIC gained a tremendous amount of publicity. It worked extraordinarily well as a spur to publication; Joe Browning immediately began publishing a line of adventures for OSRIC using professional art, layout, and cover design. 0One Games threw its hat into the ring in short order as well.

And then came the next development, which was Dan Proctor’s Labyrinth Lord system, a retro-clone of Moldvay Basic in the same fashion that OSRIC had used to clone 1e. Dan followed a different business model than OSRIC, in that he made profits from the game system itself (although giving away free pdfs), and also supported the system with a message board and resources. This model, of creating a “living” retro-clone, was extremely successful – in other words, Dan was actually able to create a community and discussion about a retro-clone game. Up to that point, I think everyone but Dan assumed that a clone game simply couldn’t gain enough traction to support a community with any measurable critical mass. Dan turned out to have been right on the money with his prediction, and thereby created the first true publishing company focused upon a retro-clone game and its resources.

My own role in things in between the release of OSRIC and the release of Labyrinth Lord had been relatively small. I don’t credit myself with the success of OSRIC, only for recognizing the legal framework that allowed a true retro-clone. The success of OSRIC was due to Stuart Marshall. I did a lot of the art (all of it in the first release, which has thankfully been leavened with more skillful work from others in the later versions), and obviously my original draft comprised the majority of the text, but basically I was out of the loop before OSRIC’s release. In retrospect, too, I was hitting a bipolar downslope right at that point, so I wasn’t doing much of anything.

However, around the time that Labyrinth Lord was released, I had been talking with Jerry Mapes, the founder of Knights & Knaves Alehouse, about doing a clone of Original D&D. That’s what Jerry played, and toward the end of his life he was really regretful that there was no clone of the edition that he preferred. After several discussions about it, I agreed to do an OD&D clone provided that Jerry helped me with it. Although I play OD&D, my version of it at that time was a mishmash of Holmes, stripped-down AD&D, and all the OD&D supplements, so even though I was playing OD&D, it was at the very late end of the game’s time spectrum. Jerry, on the other hand, played using only the three books from the White Box. Late OD&D and early OD&D are pretty different animals. This was ultimately the reason why Swords & Wizardry has from its earliest days had two different versions.

In any case, the strategy for releasing Swords & Wizardry as a 0e clone was to follow Dan’s model of a company that would support a “living game.” This was particularly important for OD&D because of the small number of available books and the small following (relative to AD&D and Basic, which had been mass-market products). My other goal was to use Swords & Wizardry as an outreach of free-form gaming into the mainstream gamer population. These two objectives have shaped a lot of the decisions I’ve made with the Swords & Wizardry game, some of which have worked much better than expected, and some of which were stupid (multiple revisions of rulebooks are NOT something that people generally appreciate, note to self and others).

That’s my summary background history of how the structure of commercial publishing has developed thus far in our community. We are in a next step right now, I think, in that there is a huge proliferation of clone games that has followed the “big three,” and a mature market for modules (eg, more than one can keep up with), with lots of third-party publishers involved. We are also seeing Joe Goodman of Goodman Games working on a non-clone game system that’s intended to capture the old school market. The terrain is completely different from the days when the release of a module was electrifying news for the entire community.

So far, I haven’t said anything about what’s bad or good in this trend, and where that new phase (a mature market) is going to take us. In the next installment, I’m going to pick up the question about whether for-profit publishing has been a benefit or a poison to our community, or whether it has been both. One way or the other, I think those who have been watching the development of our community since 2004 or thereabouts would all agree that there has been a sea change in the way things operate. Good or bad? Moral or immoral? Cool or irritating? That’s the next topic.