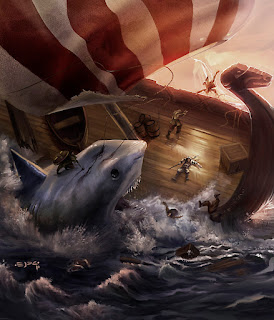 Geordie of Haque in Black has done a great review of Vengeance of the Long Serpent (it's worth noting that Geordie only just added the RSS feed option to his blog, so unless you remove and then add it again to your blog list, his blog may sit at the bottom of your list even when it's been updated).

The review points out one minor weakness that I agree with - since it's a viking-themed adventure it doesn't instantly strike the reader with a lightning bolt when reading it, because it's more of a fantasy-Norse culture than something radically new to the reader. For me, as I read on, the fantastic side of the adventure didn't begin to grow until about halfway through, as it developed more, and at that point I started to see it as being like Conan's Black Coast adventures set in the arctic. But that didn't happen instantly.

As Geordie points out, it is extremely well designed for actual play at the gaming table. That's the other perception that for me began to develop only once I had gotten into the meat of the adventure. What appears that it's going to be somewhat linear in the first few pages of the module suddenly blasts wide open, but there's no real hint for the reader that the module will take a radical shift partway through.

I'm glad that Geordie was thinking about how the module will play out on the gaming table, because this is the stronger side of the module. It's the opposite of many of the modules produced by later-era TSR where they read fantastically well but fail as gaming modules.

Please read Geordie's review, but I'll leave you with this quote (emphasis added):

One of those module that didn't grip me on read-thru (esp. the long backstory) but it'd be cool to play through, having much more flavour than the vanilla fantasy stuff.