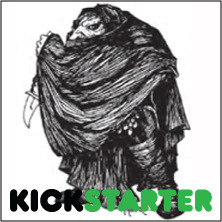 These days, a new Kickstarter isn't anything like the big event that they used to be, since there are so many, but this one is fairly unique. Center Stage Miniatures is going to be producing a large number of AD&D miniatures that haven't seen the light of day before. Or the torchlight of a dungeon's depths, either. It's being done via the fact that Wizards of the Coast once upon a time licensed the use of several AD&D monsters to Necromancer Games, which is now a subsidiary of Frog God Games. Frog God Games has licensed the illustrations of these minis to Center Stage Miniatures, and voila!

I first met Matt Solarz at North Texas RPG Con (I think it was actually the first one), and he's a very good guy. I guess it goes without saying that he loves miniatures, but he LOVES miniatures.

This is probably going to be a pretty big Kickstarter judging from the first 24 hours, which raised something on the order of $10,000. The size of it is critical, because it becomes a better deal when the stretch goals kick in. It's an okay value out of the gate, but like most of the miniatures Kickstarters it doesn't become a huge bargain until it has gathered speed, at which point it can become an absolute steal.

These are metal minis, not resin.

And that's all I can think of to say about it right at the moment. Go and take a look. I'm going to get at the very least a piscodaemon, a crypt thing, and a dark creeper.
Posted by Matt Finch at 1:52 PM 3 comments: