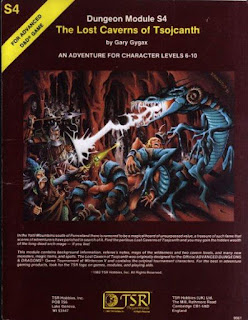 While watching my wife's macaw to make sure it didn't fly around the house and get eaten by the dogs during its out-of-cage time, I happened to spot my copy of Tsojcanth on the shelf upstairs, and pulled it out to read through.

This wasn't one of the legendary modules of my youth; I didn't have much money for the game accessories, so a friend bought it first. Since I was the DM for almost all our games, that ruled it out for playing, since one of the players had already read it. The new monsters saw immediate use, but not the module. Also, it meant that I never sat there reading through it other than a couple of quick skims of the content.

Looking at it now, with the eye of a sometime publisher, I realized that from the standpoint of the imagery, art, layout, etc., I was looking at a masterpiece.

I have always said that the introduction to Mordenkainen's Fantastic Adventure is the best module introduction I've ever read, and Tsojcanth still doesn't top it, but it comes close enough to be in Behir-breath-range. There's something very Fritz Leiber in the style of both these modules, too. It's not at the baroque level of Vance's thinking, but it's also not at the dark purple level of Clark Ashton Smith on the other end of the spectrum. It's got the Leiberlike feeling of adventure in a way that I can't quite isolate.

The cover art is mind-rocking. Darker tones, just weird enough (see the physical construction of the behir) to push past gritty and medieval imagery such as Trampier and Sutherland's monochrome covers. It is both dynamic and dark, which is a combination not always achieved. It breaks my rule that a good cover depicts the moment either just before or just after something happens. This is action midstream, and I think it's the exception proving the rule.

Okay, matching the key for the outdoor map to the descriptive text was very poorly done, and the same problem existed with locating some of the map flow in the caverns. Important information about that is buried in text. This would get a modern OSR module absolutely blasted by reviewers these days, but I figured it out, and the text in which the information was buried happened to be decent enough that I didn't mind browsing for it. I do find it interesting that the standards we currently follow for module organization would have devastated Tsojcanth in a modern review.

The boxed test is good -- avoiding being too long or too flowery. I think boxed text is an important tool for reasons I might use as a blog post at some later date.

And the internal art is magnificent. This was clearly conceived as a masterpiece work, and that shines through. That feeling, of the masterpiece-making intent, might be one of the module's strongest features overall.

I'm thinking of writing a module to accompany the new printing of the core rules, and if I do, I'm going to be looking at Tsojcanth for the organizational and editing "template." And looking for that "this will be a masterpiece" attitude when writing it.
Posted by Matt Finch at 7:57 AM