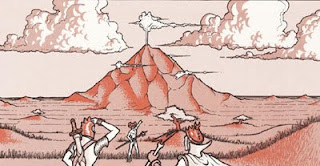 This isn't the best image - I think it's going to come out pretty small. However, most of us will recognize it as the back cover illustration for White Plume Mountain (S2).

I would like to draw your attention to the fighter who is ahead of the others, in the distance. He is wearing a diaper and a horned helmet.

Folks, it doesn't get any better than this. Seriously. I am sorely tempted to make a rule that all fighters are simply considered to have the AC of, say, chainmail -- regardless of what they're wearing (not a big concession in OD&D, where plate mail only costs 50gp). Then you can do the totally swords & sorcery thing, and go adventuring in a fur diaper and helmet, or whatever seems like it would be totally cool. Shields would still be useful, and plate mail would improve your armor, but if you want to sacrifice a point of AC to be safer from drowning, then diaper up!