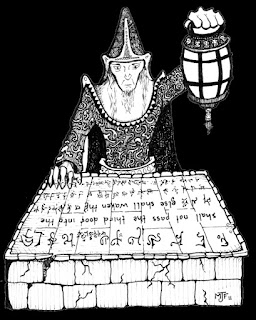 So, one of the things I did yesterday was an illustration for the "Read Languages" spell, which I uploaded as a thumbnail above. The key to the picture is that the hieroglyphic script on the tablet gives way to some English in the area where the magic-user is looking. The viewer can see what's happening with the magic as it works. Sort of cool, I thought.

That's six things I could think of to find information ABOUT.

But the next factor is this: each of those regions of information should also have more than one layer (maybe only one more, maybe a couple). What I mean: information about current occupants in G1 can tell you pretty quickly that there's a hierarchy of giants and ogres and stuff like that. That's one layer. The second layer, though, is the information that the giants are taking their orders from elsewhere and (here's the #6 piece as well) how to find the next group of bad guys.

This might sound like a huge amount of work, but I think most of us build this kind of thing into an adventure without really thinking about it. I'm not talking about complex layers of information, just that when you learn a thing, you haven't necessarily learned all there is to know.

An adventure -- this is one of the things that makes an RPG (and also a computer RPG) so compelling is that it takes place in the so-called "fog of war." At the beginning, you don't know much. Traps might be around every corner. As it develops, you begin to have a larger map. You begin to learn things about the mad wizard who lived here: perhaps his "warning!" rune, perhaps just that he collected blue pottery. Whatever.

Building the larger picture, learning more, delving into the unknown ... it is the layers of mystery
that make an RPG such a powerful genre of gaming.

It's fashionable to bust on the idea of having a "story," where the DM scripts the action too much, but it's critical to keep in mind that a BACKSTORY is something totally different and very important.

(and then you learn about how that dredged up a watcher at the gate, and orcs came and killed all the dwarves because Mr. Balrog got loose, and by the way, there's a book that the adventurers can find so they can piece together the bits (layers) of mystery they have discovered).

Give them stuff to learn, bit by bit, even if it's trivial. That's a big part of the game.
Posted by Matt Finch at 9:17 AM