Destiny, Conan, the Grey Mouser, and their Job Histories 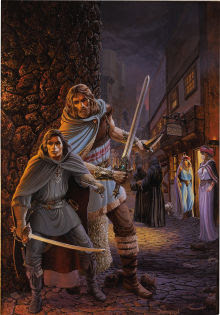 It's a fairly common device in heroic fiction for the author to provide a bit of foreshadowing to suggest that the protagonists are destined for greatness in some way, and Fritz Leiber and R.E. Howard are no different. Fafhyrd and the Mouser are mentioned as being bifurcated parts of the same mythic-hero identity. R.E. Howard is a bit clearer about Conan's destiny: he's going to be king of Aquilonia. (Okay, I don't know for absolute certain that Howard was the one to interject this into the Conan stories -- it might have been in the DeCamp stories, but which author it was isn't all that material).

I'm going to suggest a couple of ideas about how the destiny of these two heroes is quite different. That's related to my original plan for this post, which was to talk about how the two heroes approach problems, but this topic of destiny got so intertwined with it that I changed focus.

Conan the Average Guy
On the one hand, there's Conan. He's your regular old blue-collar, Joe Sixpack schlep. In general, he tries to approach things with the best sort of plan he can manage, and his goal is usually money (or, at least, food). Usually he's just trying to find a good job, and -- like most of us -- it turn out that his boss sucks, or that somebody has a hostile merger planned for his company, or that the management expects him to do stuff that's not actually in his job description, or that the company plans to terminate his employment at the end of the project.

Heroic Job Histories
As with most heroes whose story is best told as a short story, Conan's curriculum vitae is a disaster. He can't hold a job, the results of his work are generally disastrous, and he has a history of killing his employers. Fafhyrd and the Grey Mouser do little better. On the other hand, high-fantasy heroes like Frodo Baggins are reliable employees. They hold down a job for long periods of time, and usually work for a good boss. The pay is often less, but there's a lot of satisfaction with a job well done (save the world, etc).

Fafhyrd and the Grey Mouser: Problem Employees
This duo, unlike Conan, tend to remain unemployed for long periods of time, and often "live off the land," engineering a sort of primitive social welfare plan without the consent of the donors. They meander into situations, usually without any particular plan for what they want to achieve, simply relying on their ability to improvise. Whereas Conan is an ideal employee, Fafhyrd and the Grey Mouser are people you really don't want on your payroll. They divert funds, and tend to get distracted. The only reason they don't kill their employers is probably because their employers are a pair of spooky wizards that could blast them into bits.

The Destiny of Conan
Conan's destiny is to become King of Aquilonia. In other words, his destiny is to achieve a specific event. It's not a destiny written by supernatural forces, because, as we know, Conan's god Crom just sits on a mountain and watches the world go by. Like the watchmaker god of Enlightenment Christianity, Crom simply sets things in motion, tossing his barbarians out into the world like an infinite number of monkeys, mildly curious to see which ones become Kings of Aquilonia and which ones end up as fat couch-potatoes working as security guards and talking about their glory days at the siege of Venatium, drinking beer, and watching the chariot races.

Conan, in other words, makes his own destiny, even though it's waiting out there for him. This is classic philosophical determinism. With dialectical precision, Conan's migratory path from one crappy job to the next shuffles him toward inevitable monarchy like Yates's beast shuffles toward Bethlehem. His nature destines him for a specific event; his life is a teleology wearing the false mustache and beard of a picaresque tale.

By Contrast: Fafhyrd and the Grey Mouser
Fafhyrd and the Grey Mouser don't really have a forward-looking destiny. What they have, instead, is an identity. They are the residue (dregs, perhaps) of some past mythic hero that, typically for them, managed to screw up its rebirth and end up as two people instead of one. Already, here, we have the implication that determinism and teleology don't play much of a role in Leiber's world; cosmic forces do their best to work as advertised -- the rebirth of a mythic hero being one example. But as cosmic forces go, they are pretty incompetent -- the mythic hero ends up split into two bodies, like a bad teleportation.

Unlike the way Conan's course became fixed at the moment Crom breathed a particular personality into him, Fafhyrd and the Grey Mouser don't have any particular event that they're moving toward. Or, if they did, that plan had to get scrapped because it called for a single hero, and the double-half-heroes obviously weren't up to the job specifications. Rather, Fafhyrd and the Grey Mouser are caught in the currents of heroism without a destination. They are destined always to have to operate in the rarified events of mythic significance, but it's significance without destination, a great band that never seems to get a recording contract.

Cosmic Blind Instinct and Cosmic Over-Scheming in the Fafhyrd/Mouser Setting
The cosmic forces involved in the Fritz Leiber stories seem to operate on two levels. At the top level, there is a squabbling, scheming marketplace of higher beings, screwing things up in the same manner that destiny itself screwed up the reproduction of its mythic, archetypal single hero (ending up with two boozing reprobates charged up with all the power but none of the dignity of myth).

However, at the lower level, there is something deeply mysterious, represented by the gods in Lankhmar (as opposed to the gods of Lankhmar). The existence of destiny, too, is an interesting mystery, given that it's defective. Things are moving deep beneath the surface defects of Leiber's cosmology, but while the top level of gods is so scheming that it can't achieve anything, the lower, deeper level seems to operate only on a blind, reflexive level. It's like instinct, or the Jungian collective unconscious, or the secondary brain in a dinosaur's butt. At least it has a certain majesty to it. Issek of the Jug inhabits Fafhryd for a while, to execute the terms of a prophecy that Fafhyrd invented. The gods in Lankhmar rise and walk when they are upset.

Mouser and Fafhyrd are actually picaresque Heroes - Conan is not.
So basically, the Grey Mouser and Fafhyrd really are picaresque heroes, because although the universe is doing its best to provide direction, the cosmic forces are all screwed up and no-one, including the gods, has any idea WHAT the hell is going to happen. The future is undefined because the cosmic forces are in such disarray. The Grey Mouser and Fafhyrd don't seize free will: they have it thrust upon them because that's what happens when the universe can't get its act together.

Two very different ways in which heroes are related to their fictional worlds. There's Conan the hard-working hero with a specific event-destiny, and no real interference by destiny on his behalf, and then on the other hand there's the Grey Mouser duo, caught up in the rip-tides of myth but with no place to actually go.

It's kind of fascinating.
Posted by Matt Finch at 10:06 AM