... they had to eat Robin's minstrels Part I (Awesome Stylin') 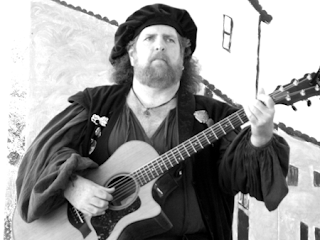 Once upon a time, in a campaign I ran long ago, something cool happened.

The party of adventurers was asked to go across the border into a neighboring kingdom to rescue a priest who had been kidnapped and imprisoned by a local lord. That's not the cool part, that's basic stuff.

The cool thing (which I will get to) highlighted something that a DM may not always be keeping in mind, and since I think many of us on the internet are usually the local DM, I (as a player more than a DM) will point this out for the benefit of all players everywhere.

Back to the story. A friend of ours (this is the RL part) was visiting, and he got to see the cool thing happen when he played in this session with the characters, who were about 7th level.

The players, before the incredulous eyes of the visitor, proceeded to plan the important parts of the expedition: minstrels, uniform livery for the hirelings, an adequate supply of strawberries, trumpeteers, and a barrel of copper pieces to throw to the slack-jawed peasantry along the way. This was NOT thespianism or method acting, or anything like that. It was all undertaken with the seriousness of making sure that the hirelings had armor and that there were mules and ten foot poles.

What some DMs forget is that for the players, this is a game of stylin'. Style. Panache. Swooning maidens, rock-star bad-assitude, and flowers in the god. damn. streets. Bling, baby. You think you're tough? My sword has a name and glows, and you still have five payments due on your wooden pitchfork, Mister Farmer. You're nothing but a dice-roll on my rumor table. The boys are back in town.

My own magic-user character, for instance, wears a bitchin' aztec headress that he acquired from someone who was no longer in need of it. That's style. Not good taste, but it's style. Also a good decoy, since the local baron probably knows that I refer to him as "the guy living in my future house."

Returning, though, to the players I mentioned before, this was part of their standard operating procedure. At second level they started hiring minstrels to write and play songs about their (highly exaggerated) exploits. This was a FUN campaign, in capital letters. Sometimes they ended up in situations where their highly overblown reputation put them in some seriously deep poop, and sometimes it got them out of dangerous situations. Try stalking up to a dragon halfway through its "I will kill you and lay waste to your general vicinity" speech and calmly offer it one of your strawberries "before we begin." Dragon suddenly thinks twice when faced with this kind of "yeah, whatever" reaction to its most terrifying routine. They would have been toast, but the minstrels ready on the sidelines, quill pens poised to record the details of its demise -- this is the sort of thing that makes dragons nervous.

Players don't enjoy a game where they are nobodies forever. Indeed, their whole effort is geared toward becoming the kick-ass powerhouses of legend. My aztec headdress. Their minstrels and strawberries and trumpeteers.

Never forget this about players. Don't smack down the style -- work with it.

Next up, in the second and final part of ...they had to eat Robin's minstrels is a discussion of player stylin' as it applies to Fafhyrd and the Grey Mouser, as opposed to Conan, and with important philosophical references to Robin's minstrels. Don't miss it -- I haven't actually written it yet, but I just bet it will be awesome.

*Since I'm using his image from Google images, I should direct people to the underlying website of Martyn Wylde, HERE. I'm totally unfamiliar with him, but it seems only faire.
Posted by Matt Finch at 10:34 AM