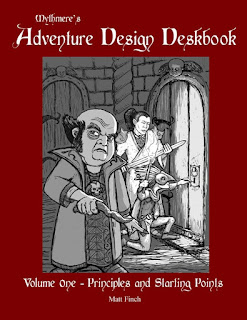 James Smith of the inimitable Underdark Gazette has done a sort of combination review-and-demo of my Dungeon Design Deskbook (volume 1). I don't know if he's planning on fleshing the exercise into a series as he continues with it, but I'm really psyched that he's liking it so much.

Especially that he's so pleased with it when he starts the post with "I'm feeling sluggish, uncreative and generally out of sorts, today. So, my current emotional reality will make for a fine test of the material."

This sort of introduction to a review can send shivers down an author's spine, let me tell you. However, it seems that generating some adventure background with the book cheered him up some, although the scenario he generates from the tables is pretty grim. A nice scenario, by the way. He concludes: By the way, I love this book. You should get one, before FGG runs out!

The four volumes of this series are all written, and will be published as a single volume by Frog God Games in the fairly near future (I don't have the estimated date, yet, but soon). In the meantime, if you want to get just one (or both) of the first two volumes, you can get printed copies at Frog God Games -- the various legacy products from BBP that are in stock are all listed here. (look on the right hand side to see the list).

I didn't have the pdfs up on lulu until James wrote his review and I got a couple of emails asking where to get the pdf. So I have put the pdf of volume 1 -- the one James reviews -- back into the store at a cut price (since eventually this will only be part 1 of 4). Somehow I don't have a pdf of the second volume (Monsters), so I'm working on that. Probably in the wrong folder.

Also, I can't make Photoshop work on my new computer, so the little promo-picture for the pdf is one of lulu's crappy templates. The actual cover is only visible in the preview.

You can find the pdf here: Direct link to Mythmere's Adventure Design Deskbook #1
Or if you want to check out the whole store, this is the link to the whole store.
Posted by Matt Finch at 8:53 AM