B is also for my Aunt Agatha ("Bantha") 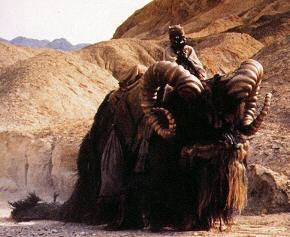 This is a family snapshot of my Aunt Agatha (with the horns) and my Uncle Joe (sitting on shoulders) on their way to play golf at the Sweetwater Country Club. Aunt Agatha is a member of the Temperance League, but her main claims to fame are achieving the vote for women from back in the days when she was a suffragette - this hints at her age, which I will not state - and her walk-on role in the original Star Wars movie.

The reason I share this snapshot is because of the popularity of Aunt Agatha's character - the bantha - and its relevance to gaming.

Gaming requires a visual element. One of the reasons that Star Wars is such a rich setting for gaming is NOT because of its plot - rebel alliance plus empire, etc. It's because that setting was reinforced by visual imagery. What can't really be captured by description comes to life on the screen, and is thereby transformed.

Relating that to gaming, let's say that I have a troop of bantha-riders about to come over the horizon because that's what I wrote for hex 7490, and the party has just entered that hex looking for the Lost Shrine of Tamoachan. I have two choices: I can describe a bantha, or I can drag the family snapshot of Aunt Agatha from my wallet and snap it out like a police badge: "THIS is what you see!"

Strong stuff. Obviously, by showing a picture, I have taken advantage of that rule where "a picture is worth a thousand words."

On the other hand, I think it can be overdone.

The basic, fundamental, underlying, primordial engine of an RPG is the back-and-forth conversation between the DM and the players. I strongly believe that the most powerful gaming atmosphere is the one where the two sides of the table are talking. Not showing pictures, not reading aloud, not looking up rules. Talking. An RPG is at its highest octane when it's running in "conversation" gear.

"Read-aloud" boxed text, pictures, and even checking a rule all have their place, but as a DM I always try to keep in mind that all this stuff is used for the purpose of getting the players and myself into that conversation gear, the zone where ideas and questions are flying back and forth without anything else intruding.

Pictures and everything else are somewhere like first and second gear, where you're revving up. If you want to drive fast, you definitely don't want to start in fourth gear - that's basic gear-shifting advice. But when you hit cruising speed, you also don't want to suddenly shift back into first gear, either.

Everyone has his own sense of how to run a game table - I think there is a cruising gear (which is the strongest part of the gaming session - the conversation zone), but that you have to get there by building the players' visual picture. Once you're in that zone, though, I think it's a bad idea to break the conversation mode by reference to anything other than conversation. There's an exception to every rule, of course, but I think the analogy of a gaming session to the gears of a car is a very interesting and appropriate way of thinking about it.

In any case, IIRC, Aunt Agatha hit a hole in one that day, which is why we all got copies of that snapshot at the family reunion.
Posted by Matt Finch at 11:28 AM