S&W Core Rules - FREE for all! 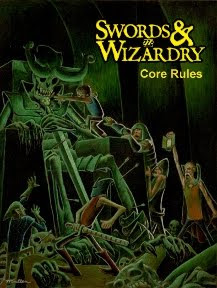 The fourth printing of the Swords & Wizardry Core Rules are free for all! You can (and definitely should) download them from THIS PLACE RIGHT HERE AT RPGnow, so you can start enjoying them right away.

For those who will be playing in my Mythrus Tower game at NTRPGCon, these are the rules I will be using for the great dungeon delve into the megadungeon!

There is also a 2-page snapshot of my campaign, including the area around Mythrus Tower itself, included in the pdf (I had pages to fill to make the page count work out to a multiple of 4).

(Not to sound like P.T. Barnum, but this is the event of all time. You should hear this in an Archer voice. If you don't know what Archer is, it's a cartoon that's freaking hilarious on some cable channel).

Note: until I take them down, the books are available at Lulu but DO NOT BUY THEM unless you are a risk-taker because I haven't received my test copies yet. They should be fine, and I know some people may want them in time for NTRPGcon, and today is still a big lulu special using the coupon code, so they are currently available for those of you who are cool with taking a slight risk.

I have yet to decide if I've got enough cash to buy some extra copies to bring to the con or not.