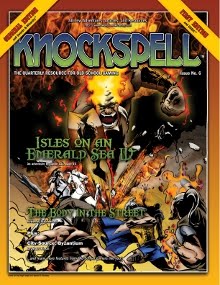 Ever since Calithena decided to close Fight On!, I've had a lot of supportive people contact me about restarting Knockspell Magazine. I outlined my difficulties with that idea in an earlier post, but I have since been convinced not only that the magazine fills a valuable niche, but that producing it isn't something that will utterly swamp me.

One of the key ideas that will help this work is that several of the bloggers who are writing material for the Swords & Wizardry Appreciation day will allow Knockspell to publish their work in printed/pdf form. To that end, I will be asking all of you who are participating to send me a letter (the form of it later in the post) containing your approved form of the manuscript and the permission to use it.

Next: I'm NOT going to do this issue as a Kickstarter. Unlike many people, I don't have a problem with the idea of a Kickstarter being used to fund an as-yet-unwritten publication if that approach is needed for some reason, but for myself I don't do that simply because of having bipolar disorder. There's always an outside chance that I could be temporarily down for the count at a crucial moment, so I don't take pre-orders unless I have something fully written.

The present plan is to put it up on lulu, rpgnow/dtrpg, and d20swsrd.com as well.

So, for anyone who would like to have material included in Knockspell -- with the understanding that it might not be included, and that I might come back with editorial suggestions -- please email me (mythmere at yahoo DOT com) the following:
1) A copy of the manuscript as you would like it to appear (in case you use a different "voice" on your blog than your actual writing style)
2) The statement that "I am granting Matt Finch and Knockspell Magazine the non-exclusive but perpetual right to publish the work in any medium." That way, I can, down the road, publish something like, for example, a Knockspell Compendium for epub (or for some as-yet-uninvented file type) rather than just issue #7 as a print/pdf document. You as the author retain the copyright, and you can re-publish elsewhere if desired. Michael Curtis's Dungeon Alphabet was first published in Knockspell, for example.
3) A statement that "the work is my original work and does not violate anyone's copyright."
4) If the work contains Open Game Content, please let me know this, and the source, so that I can include the proper legal language in Section 15 of the OGL
5) A statement that "I agree to let Knockspell release my work as Open Game Content." If you wish to keep some of the content as your property (generally this would be a proper name of something) rather than Open Game Content, you must let me know so that I can exclude it.

I hope to hear from people! I will have more updates next week.
Matt
Posted by Matt Finch at 10:14 AM