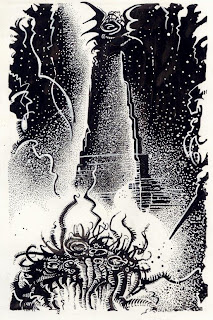 Check this out. If weirder fantasy is your bag, School Master (who are you?!) has provided an entire set of campaign notes, including links to all kinds of game and Lovecraft resources, for a campaign in the Lovecraftian Campaign-world of Mu. This is a must-see.

NOT JUST THAT!
If you're up against an impossibly non-Euclidian wall with tentacles on all sides, you might just have an equalizer. Go Solomon Kane on their ass and haul out the black powder pistol for some Thirty-Years-War-era tentacle-blasting. Dak Ultimak provides a full set of rules for firearms (mainly modern ones, but including black powder pistols). War Hound and the World's Pain and Solomon Kane in Swords & Wizardry. For when shit gets real. I love the idea of Puritans against the Old Ones. There's a whole campaign world in that one idea.

Reverend Dak has a picture in his post that really says it all: 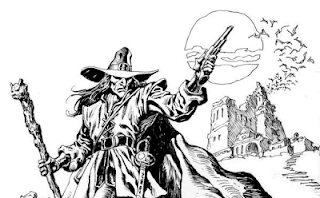