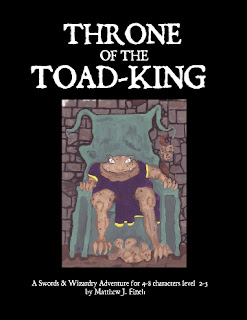 The vaporware solidifies! After playtesting, editing, and painting cover art, this long-awaited module is almost ready for release. It's the first of a two-part series in which the players discover some dark secrets in a really open-ended adventure deep in the subterranean realms. It has a bit of an underdark feel to it, although it is for lower level characters that shouldn't be wandering around in the real underdark.

Like Pod-Caverns of the Sinister Shroom, the adventure area can be entered from multiple possible approaches, depending on whatever adventure was just completed in the campaign. It's highly modular, and in fact could be dropped right into an existing megadungeon of any kind, if that's what you need.

I'm still waiting for some art, and then will do the layout. There might also be some more comments coming in from playtesters, who are now reading through the module with the changes that were made after the playtesting session.

This is a Mythmere Games module, and I'm the author -- it's been a long time since I wrote Spire of Iron and Crystal, so it's great to finally have another module completed and ready (almost) to rock and roll.
Posted by Matt Finch at 10:16 AM