Pathfinder Tome of Horrors - the saga 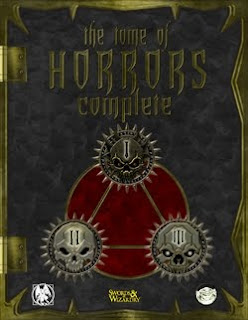 Except for the bit at the end about S&W, this is most likely not of interest unless you're a spectator of interesting events in the new-school gaming community or the mainstream "industry," but we had a wild day yesterday with the Pathfinder version of the Frog God Games/Necromancer Games Tome of Horrors. I tell this story because there's a Swords & Wizardry version, and some of these events have indirect (probably positive) results on the S&W version.

See, Paizo had gotten 1000 copies of the PF book to sell directly, at the same time Bill Webb was selling another batch (500, I think) directly from the Frog God website. Bill had pre-orders for all the ones at Frog God, so that was basically a done deal as of a couple of months ago when the deadline for pre-ordering ended. However, Paizo opened up the book for purchase yesterday, announcing it by email to everyone on their mailing list.

They were quite clear on the fact that this was a limited print run -- we had no expectation that we'd be comfortable financing a second run of the book with a $40,000 up-front price tag. So we told collectors that it would be a limited run (which solidifies the print run numbers, because collectors are generally more willing to pre-order expensive books than regular gamers). Might as well, right?

So, the Paizo email goes out.

And all hell broke loose. Their website didn't crash, but they were selling at a rate of more than a book per minute. And the entire 1000 copies were sold out in something like 8 hours. A ton of their customers hadn't even read the email by the time the books were all gone. The action shifts to their customer service department and their message boards, with literally hundreds of people asking why they couldn't get a copy of it.

So, as WEIRD as it might sound, I was on the Paizo forums yesterday afternoon talking to Pathfinder players (and a couple of awesome Swords & Wizardry dudes who were there to gloat at the Pathfinder players, which wasn't very nice of them). Since Bill Webb was on the phones working up a plan for a second printing -- with that big problem that we'd said it would only be 1,500 copies -- it was me and a couple of the other members of the development team answering questions and reassuring people that we'd figure something out. Also explaining that, really, $40,000 is a lot of money and it would have been impossible to have printed more books than we did.

Finally Bill, Clark, Erik Mona, and Lisa (?) who is the prez of Paizo came up with a plan for how a second printing would be done, and raced out to calm the waters.

This is all the Pathfinder version. There are still an estimated 50 copies of the Swords & Wizardry version available, but the sale button at FGG is turned off until September 26. The reason is that the money-taker thingy part of the website's brain is not reliably linked to the inventory-counter thingy part of the website's brain, so it would be possible to sell more copies than there are. And Bill's not going to be able to watch it closely, because he's dealing with 4 tons of books to ship out, plus everything involved with this second printing.

This does mean that I've got a good chance to make sure that an "unlimited edition" of the Swords & Wizardry books can also get done and put up on POD. That will require splitting the book up into parts, because POD doesn't do the super-heavy-duty stitched binding that's needed for a 700 page book (or whatever the page count is -- I forget). So this is a good thing. On the other hand, all this has made the S&W version, in an odd twist, into the most desirable collectible out of the lot -- because it's the smallest version of a "major event" printing. So if you really want specifically a single volume version of this, email Bill to make sure you're in the queue. Don't expect a response in the near term -- packing and shipping existing orders is the priority, and there will be lots of shipping-related email, not to mention people asking for second printings. It's going to be a mess.

If you don't want to pay $100 for a single volume S&W, you're probnably (I can't promise, but probably) safe to wait until those are sold and a POD version is laid out. If you desperately want a single volume, though, you should send that email and get on the list before collectors buy them up.
Posted by Matt Finch at 10:52 AM