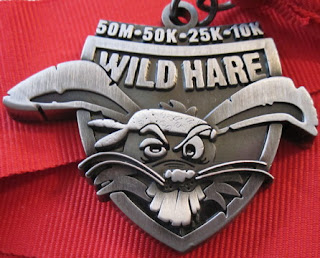 I'm alive after my first ultra-marathon! Having run a few marathons on regular city streets, I'd thought when they said "trail run" that this was mainly going to be like running on streets but with a nice covering of pine needles on the surface.

Holy ... was I wrong. This beast is done on a moto-cross course, and I literally don't know how someone would survive it on a bike. Plunges into ravines, rocky trails laced with tree roots, more ravines, and everything with rocks. Lesson learned in the first five minutes: you use muscles running cross-country that you don't use in a street run. It was wild.

The ultra-runners are very different from the average marathoners -- very, very cool people (not that marathoners aren't, but there's a difference).

We started running at dawn, and dark had just fallen when we crossed the finish line 11 or so hours later; we went slightly further than running from "dawn to dusk," dusk not having held out for the five minutes that would have been required for a truly poetic description. This distance would only have taken us maybe 8 hours or even less on a street run, but I'm astonished that we got though it in 11 hours through that terrain. Some people ran 50 miles through it in that time, and that's just ... name level in the class.

ps - didn't have the energy to photograph my real medal, which has a black ribbon but is otherwise the same.
Posted by Matt Finch at 10:38 AM