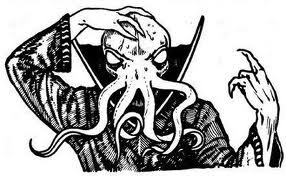 It's a real head-scratcher of a puzzle.
We all pretty much know them: the rust monster, the mind flayer, the beholder, the drow, and other monsters that are incredibly popular. And a couple of them represent a design challenge in Rappan Athuk. Reason: Necromancer Games had a special contract with WotC allowing them to include beholders,mind flayers, and displacer beasts in the 3e version of Rappan Athuk, and that deal isn't available for Pathfinder or Swords & Wizardry.

A Sinister Opportunity
So, in the gatherings around the Watercooler of Many Things, down in the deep levels of the Frog God lair, we've taken the approach that -- from a design perspective -- this is actually a tremendous opportunity forced upon us by circumstances. Really, the presence of these iconic monsters in Rappan Athuk's 3e version was part of the "old school feel." And there's no denying that running like hell from a beholder is as old school as it gets. But on the other hand, the truly masterpiece modules from the TSR glory days were those that INTRODUCED iconic monsters either in context like the D series where mind flayers were seen in their natural environment, or where they appeared as entirely new monsters (the drow).

The Fiendish Plot
We're aiming for a masterpiece with Rappan Athuk, a real pinnacle event. And that means we need to push beyond the boundaries in the same way that TSR pushed the envelope with the classic modules.

Which means the introduction of a couple of iconic monsters. They're on the drawing board at this time. Simply as a matter of not fixing what ain't broke, they're going to be swapped into pretty much the same areas as the original iconic monsters appeared, or there would be too much tinkering around. They may also appear in some of the new areas.

What Makes a Monster "Iconic?"
The interesting question, though, that I've run into while designing these new monsters, is the fundamental question of what makes a monster one of these iconic types. Clearly, the baseline requirement is that it's new,not something from regular folklore (the drow skate closest to folklore, but they have a wealth of non-folkloric detail in the D series). In addition to novelty, though, I think there's more to it. For one thing, at least in the case of the beholder, mind-flayer, and drow, they have to be intelligent enough to be behind a variety of different nefarious schemes. I think this is true even if in the module itself, they are only involved in one particular plot. The reason being that in order for the monster to capture the imagination, the DM has to get a glimmer in the mind's eye of other possibilities, wider ideas, other adventures that could stem from the monster. A good monster works well in the module where it appears, but an ICONIC monster has to grab the imagination INDEPENDENTLY of the adventure in which it appears.

I might have more to say about this later, but so far this has struck me as the key factor involved with creating a truly iconic monster.

Any other thoughts about what constitutes an iconic monster are definitely welcome, and will be discussed at the Watercooler of Many Things.