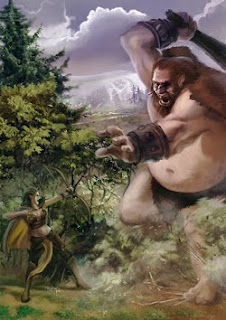 Valley of the Hawks is the first Hex Crawl adventure/setting by John Stater for Swords & Wizardry, published by Frog God Games (link here). It's $4.99 for the pdf or $9.99 for the printed book/pdf. So far I don't have any links to reviews, because the only physical copies out there are the ones that were sold at NTRPGCon.

Description blurb:
The Valley of Hawks is a wooded river valley that cuts across a verdant prairie. It is named for the giant specimen of hawks that hunt along its banks and, during the Spring, blacken its skies. In the days of myth and legend, the Valley of the Hawks was inhabited by a race of giants who carved their likenesses in stone and hunted monstrous creatures using the giant hawks as their ardent companions and helpers. In the shadow of the giants dwelled the trouping elves and their erstwhile goblin enemies, fighting and feasting and making sport of life. The coming of the golden men from the west sent the proud elves and vicious goblins into hiding, for they commanded powerful magics and built a grand city of metal and crystal. But the reach of the golden men exceeded their grasp, and within a few generations their city had fallen and sent its children into the valley as orphans, and the elves and goblins worked their vengeance on them until only a few bands of the golden men, as wild and savage as the beasts, still roam the Valley. And so our adventurers arrive in the Valley of the Hawks seeking fame and fortune. Perhaps they come from northern lands or southern lands or perhaps they were born in the Valley and seek to learn its secrets and use its wealth to found a new city in the manner of the long gone golden men, a city that shines and terrifies and engraves their names forever in the stories of elves and men.
Posted by Matt Finch at 10:08 AM