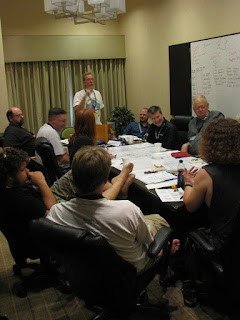 That's me on the chair, and then to my left (viewer's right) there is DungeonDork, Erol Otus, Dennis Sustare, (then about 3-4 people out of the frame, from the unseen Marshall Mahurin until you get over to Austinjimm), the back of Austinjimm's head, the back of Bill Webb's head, ANGRYWIZARD (feet on table), the back of Ala's head, Rob Badolato (Badmike's brother, playing a hobbit thief), and John January.

Thanks to Bill Barsh for snapping the picture!

I think this was during the battle in the interdimensional pirate ship sunken on the 4th level, where an evil voodoo-undead box with minions was fought with all kinds of awesomeness, including cannon-fire from one party member into the middle of a melee, hobbits swinging on ropes with a charmed bugbear (and later with the evil undead-thing clinging to the bugbear's ankles toward the end of the trajectory) collisions with invisible characters running with open oil flasks, a character turning into an undead-minion-thing during the battle, etc. It ended with the ship returning to its natural state, so old that the wood is petrified, rising up incorporeally through the earth to settle on the ground near the dungeon entrance with the party still aboard. Plans are underfoot to turn it into an adventurers' tavern with the bugbear as bartender.
Posted by Matt Finch at 12:29 PM