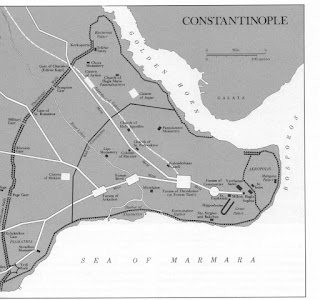 My job for today is to finish my article for Knockspell Magazine on Constantinople as the source for a fantasy city. It's going pretty well, with a summary of pre-Roman history, then a timeline running from Constantine's elevation of the city into his Imperial capital, and then sections describing the most interesting elements of the Medieval city rather than tracking the history itself. For purposes of creating a fantasy city, it's the themes rather than the linear history that will be the most important creative tool for a Dungeon Master.

Some time ago I started taking notes on Constantinople after reading the novel "Sailing to Sarantium" by Guy Gavriel Kay, which I highly recommend. Since the main city in my campaign is "Cyprandium," it's all grist for the mill. I'm filling in the gaps in those notes and turning them into an article with some commentary about how one might choose to employ the various elements in terms of gaming. I am not, however, focusing very much on how the city would "logically" change as a result of being in a world where magic is more or less common, since I think all Dungeon Masters tend to apply that kind of logic to a very differing degree, and also make their cities at very different power levels.

Anyway, that's the task for today.
Posted by Matt Finch at 10:52 AM