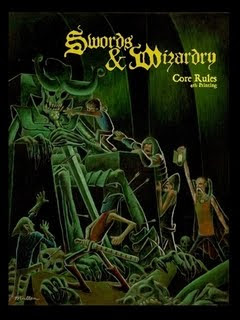 Several people have told me that they prefer the original title font that was used on the covers of the earlier printings of the Swords & Wizardry Core Rules. The reason for ditching the original font was because Blackletter fonts aren't good for off-the-shelf sales if the book goes into distribution. Since, if Swords & Wizardry goes into real distribution, it would be the Complete Rules, that issue doesn't exist any more.