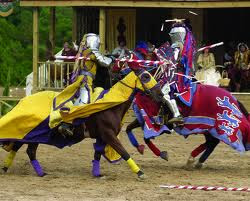 Although no one else in my family actually plays D&D, we've got a pretty fantasy-oriented family culture. My wife loves the Renaissance Festival and Baldur's Gate, my sons both play Oblivion, my daughter loves Harry Potter. So, if there's a loud crash from the kitchen, you're likely to hear someone shout, "Failed my saving throw!" or something similar.

Every year, we go a few times to the Texas Renaissance Festival, which is a really huge and sprawling renfair. It's the largest one in the country, and I have to admit that it is slightly (not a whole ton, but slightly) more commercialized-feeling than other renfairs I have seen. Granted, that's not many, but I've seen a couple of others.

Anyway, we got the little brochure for this year's festival, which will be in October and November, in the mail a couple of days ago. And I am looking at it with skeptical eyes. There is now a "king" whose picture shows up, like Burger King or some other trademark, on the program cover for each of the themed days of the fair. He's smiling in a pirate costume for "Pirate Adventure" weekend, he's smiling in a great-kilt for the "Highland Fling" weekend, etc. Each weekend has a theme. That's questionable enough, but having the same guy modeling each one has a decidedly "brand name" feel to it that wasn't there back when the covers had crowd scenes of regular people on them. He's front and center on each one, too.

I have a bad feeling about this, although possibly it's just a more corporate skin to it, and the fair itself won't have an increase in the commercial feel. If it keeps creeping closer to Disneyland, it's eventually going to lose us.
Posted by Matt Finch at 12:02 PM