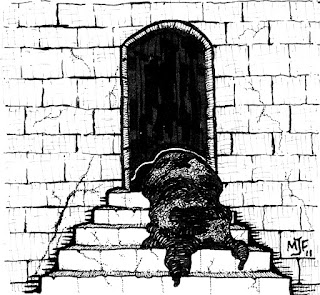 A quick preview of a monster that will be showing up in Knockspell #6:

Rot puddings are nasty subterranean creatures with slug-like bodies made of some viscous substance, looking much like a dark grey jellyfish. These puddings are scavengers in the dark caverns and hallways of underground places. The carrion diet of rot puddings makes them into seething incubators for all kinds of disease, and although they are themselves immune to sickness they are highly contagious host-creatures that can transmit all manner of plagues by the merest touch.

The diseases carried by a rot pudding can be transmitted in various ways during a combat with adventurers. First, if the pudding itself hits a character, the character must make a successful saving throw or be infected. Secondly, if the pudding is hit by a bladed weapon (not a piercing or blunt weapon), the wound will squirt a pus-like substance which will cause the attacker to make a saving throw or contract the disease. There is also a third possibility: if the pudding is burned by a fire larger than a torch, the disease from its surface will temporarily be burned off into a cloud of noxious smoke, which (unless there is some fairly strong source of moving air) will be roughly ten feet in diameter and will drift in a random direction each round at a speed of 1. Anyone in the cloud must make a saving throw or contract the disease. There is one beneficial effect of burning away the surface contagion of a rot pudding, which is that the creature’s touch will not cause disease until 3 rounds have passed.

The disease, if a character is infected, has the following effects. The character will immediately be wracked with pains and aches, affected as per a slow spell (able to act and move only at half normal speed). After a period of 24 hours, the character must begin making saving throws once every 6 hours. The first failure of such a saving throw causes the character to fall into a comatose state. The second failed saving throw causes death. A cure disease spell will cure a diseased character, and although a neutralize poison spell will not remove the disease it will grant a +1 on all saving throws. A character who is infected with the disease also become contagious, although the contagion is much less virulent than the concentrated effect of an actual rot pudding. Anyone approaching within ten feet of an infected person has a 50% chance to have to make a saving throw against contagion, and if the saving throw fails, the disease is transmitted in the same form as if it had been contracted from the pudding.

Rot puddings are immune to cold and electricity. A cause disease spell will cure one half of any damage that has been inflicted upon the creature.