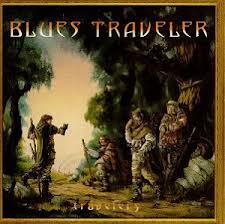 You can't see all the detail, and this definitely isn't the best album by Blues Traveler ... but I love this cover picture from the Travelers and Thieves album. It screams old school D&D to me, not just the image but the title of the album, too.

This view of adventurers is sometimes derided with the term "murder hobo," but in many cases that term is wrongly applied -- particularly in fantasy games. There is a whole type of fantasy game in which the attraction is the idea of crossing the border of civilization into an area that's entirely wild ... and fighting that wildness. (And, yes, taking its stuff). It's not murder in this idiom, it is defense of the helpless civilians that are back behind the lines.

In the zombie apocalypse, when a beat-up VW van skids into the parking lot with some guys leaning out the door blazing away with all kinds of weaponry, and you dash into the safety of the van just ahead of the zombies that the guys are blowing away ... that's these guys. They aren't murder hobos, they are force-recon hobos.

The whole concept of this sort of fantasy is that everything outside the hedges and fields is basically "Here be Dragons." It's zombie apocalypse from one horizon to the next, with the exception of the few enclaves where the endangered species of humanity depends upon the tough sons-of-bitches that are better at killing than the worgs and the ogres.

It's not the only kind of fantasy, but if the camera were to be following Aragorn in the year prior to his arrival at the Prancing Pony in Bree, I think you'd be seeing Middle Earth through an entirely different, and considerably grittier, lens.