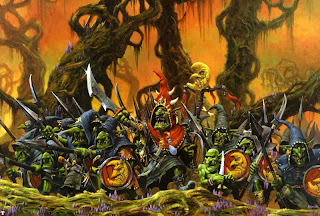 The dilapidated port town has yet another problem. Along the only channel that isn't infested with sea serpents, someone has begun dropping boulders onto passing ships from the cliffs above. The sunken ships are then looted, and any surviving crew members are being sold into slavery.

After defeating the goblins at the guardpost, they had a rousing battle on a wide stone ledge outside the goblin cave, killing the goblins and their ogre with tactics involving invisibility, a flying carpet, and lots of arrows fired into melee combat.

For only a 2-hour session, it was great fun.

PS, yes, I think Warhammer goblins are the best.
Posted by Matt Finch at 9:49 AM