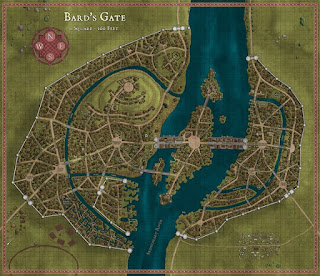 If you like fantasy cities, you're probably already watching this Kickstarter, but the news of the day is that it has funded at the $70,000 level and is now headed into stretch goal territory with 60 hours left to go. It's hard to say how many of the goals it will hit, but Frog God Kickstarters tend to have a massive surge within the final 48 hours or so. At least another $10,000 will flow into this project before it finishes.

The cloth map is incredible, and the book is going to be massive in the tradition of Frog God releasing one or two giant, epic books per year. This will indeed be an epic book, in full color, and while it's perfectly usable as a stand-alone city in any campaign, it's also tied in to over a decade's worth of Necromancer Games and Frog God Games adventures. Basically, it's the "City State" of the Lost Lands world setting.

Very much worth taking a look.
Posted by Matt Finch at 8:35 AM