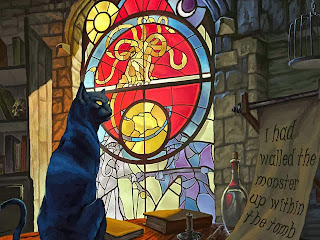 Today's blog topic is an easy one: the Sword of Air Kickstarter funded this morning, hitting the $75,000 mark. This doesn't yet reach the goal that's more important to me, the 400-backer target that lets us pay off remaining royalties on the Swords & Wizardry rules pdf, but it's still the most significant milestone along the way.

Next time (reminder to self) I hope to write about compatibility across OSR products.

Sword of Air, for those not familiar with it, is Bill Webb's big adventure series from his home campaign in the late seventies. It has a big wilderness map and several locations that were the adventure locations. The locations are awesome; on the other hand, the way Bill had them tied together in his campaign was as part of a quest to assemble an artifact, which is a device I don't like, myself. In his defense, he wrote this in 1977 or some ridiculously early point in time.

My sense of it is that the locations will be much, much stronger than the quest, in terms of influencing the book's feel. Bill doesn't write railroads or plotlines, he writes locations, and he hates "storylines" in an adventure, so my guess is that, despite the "Sword of Air," this is really going to be more like "Area of the Sword."
Posted by Matt Finch at 8:08 AM