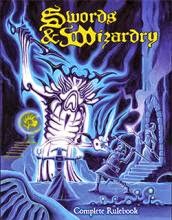 As a part of the Sword of Air Kickstarter (large mini-campaign with epic adventure designed back in the late 70s), we are planning to release the Swords & Wizardry Complete Rulebook as a free pdf instead of charging the $10 we used to charge for it. This isn't just a bit of marketing legerdemain: we will be foregoing almost a couple of hundred dollars a month because of this. However, we decided that we want to stay dedicated to the retro-clone concept by making the base rules available as inexpensively as possible.

In connection with the Kickstarter we are paying off (or already paid off) all the financial obligations attached to the rulebook, and will release it free forever afterwards.

This makes the people signing on to the Sword of Air Kickstarter kind of unique -- they are giving a gift not only to the other backers but to everyone. Everyone in the whole world who wants a copy of [our version of] the Original 1974-78 rules. We do have to reach 400 backers before the rules are released, but I'm pretty sure it will happen.