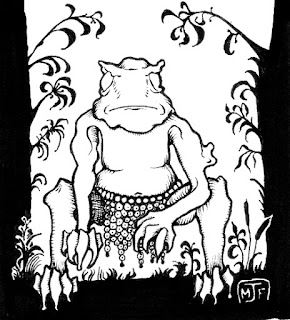 While my computer was dead, and for quite a while before that, I finished several illustrations for the upcoming book of new monsters for OSRIC,along with getting a great hag-picture from Paul Fini, which he's also posted on his blog.

Russ Nicholson is doing two more illustrations, which will probably be done around the end of this month, give or take. At this point I'm basically setting myself seven more monsters to illustrate (all in the demon section, which I want to be well covered illustration-wise). I might do more than that, but those seven are the minimum target. In the meantime, I have to finish the conversions to OSRIC -- the stats are mostly done, but the treasure still remains, and that's going to take a long time.

...And of course, I need to start sending in my levels of Rappan Athuk at this point, which means frantic self-editing and still some writing.