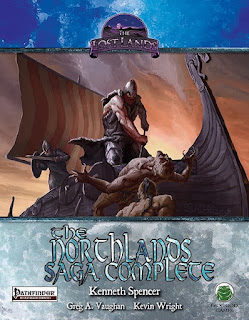 Interrupting the series on old-school DMing methods ... vikings. Frog God Games is starting our Northlands Saga Kickstarter today, and it has a Swords & Wizardry (0E, old-school, etc.) version for those of us who don't play Pathfinder. I'm not going to include the "Venture Into Adventure!!" type sales blurb -- it's on the Kickstarter page, and if you like vikings at all, you'll at least be headed there to take a look.

These are excellent adventures (once exception that's not excellent but still solid), and the feel of the thing is like R.E. Howard wrote the Elder Eddas, and Clark Ashton Smith edited it. I'm still in the process of doing the conversions -- the book is written, and the only two missing components are the remaining art (which is coming in at the speed of art) and the conversions (which are being done at the speed of conversions).

For those following the Lost Lands world setting, which is the campaign containing all the old Necromancer Games adventures from the old days, this book is part of the Lost Lands.

This is an "adventure path," which for Pathfinder means that it's a campaign series taking your characters from level 1 to a billion. In S&W, it's altered a bit to make it a linked series like G1-G3, and it goes from level 1 to level 9. A few stretches in terms of the experience gathering there, as one might expect, because it simply compresses level acquisition into too short a period of adventuring.  It's a non-issue if you plan to use the adventures as stand-alone pieces interjected as possibilities into the campaign when the characters reach the right levels. If you want to run it as a series, the progression works, but it would still be beneficial to throw in a few side adventures, IMO.