It's that day when suddenly a convention has crept up on you, and you suddenly have to (1) Shop so that the family doesn't starve during your absence, (2) get some shorts that don't have the back pocket ripped out, (3) make sure someone feeds the birds while you're gone, (4) pack, (5) consider that the dungeon isn't exactly ready for adventuring, and (6) pick up the dry cleaning. You have to be time-efficient.
One piece of advice I can give to con-goers preparing for a trip is this: try to do two jobs at once, like updating your blog at the same time you make your to-do list... 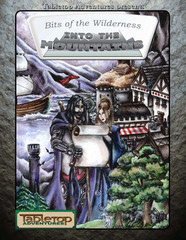 I already posted one of the Tabletop Library Memorial Day sales going on, in a previous post. Here is another, coming from the (unaffiliated) Tabletop Adventures. Until June 1, all of their products are 20% off. As a personal note, I think their "Bits of" products are awesome, although the crunch in them is for 3e. I'm not familiar with Against the Darkness, which is their RPG, but anything with the word "Vatican" in the description makes me sit up and take notice. Here's the description:


Do you have what it takes to stand Against the Darkness? Find out in Tabletop Adventures’ exciting game of modern Vatican horror, conspiracy and investigation in which demons, ghosts and vampires exist to torment and feed upon an unprepared humanity. The only defense is a small and steadily shrinking cadre of holy defenders. 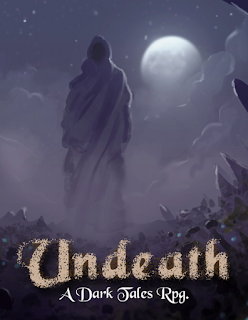 This isn't one of my own products; it's from FeralGames. I haven't read it myself yet, so take it for what it's worth, but the premise is very cool. It's on a very deep sale today -- Memorial Day only -- on Tabletop Library.

Premise: You are dead and have awoken in Limbo, in order to reach the hall of Heroes you must climb the Mountain and gather souls.
Posted by Matt Finch at 9:45 AM 1 comment: 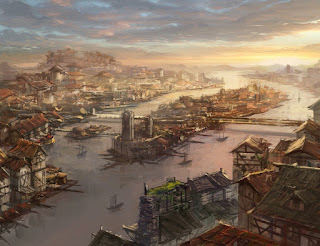 Another little news item -- Tabletop Library has an ongoing 10% off sale until the end of the month, with the discount code EXTRA-10. Virtually every digital product on the site is part of the sale. Also, the publishers are getting an extra 10% cut to offset the sale, so there's no downside for them if you load up on everything you can fit into a digital cart.

For those who are trying to evaluate the costs and benefits of publishing for 5e under the Open Game License or under the DM Guild License, may I recommend the following: 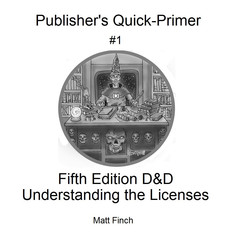 And for a Swords & Wizardry adventure, the estimable Guy Fullerton can always be relied upon: 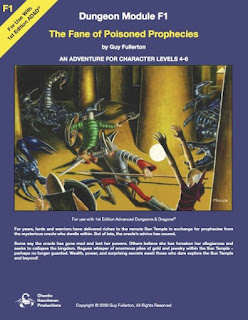 BTW, if you buy something and like it, REVIEW it. Even a short 5-star review can be an immense help to the publishers.
Posted by Matt Finch at 12:06 PM 1 comment:

Enough Shilling! Back to Monster Killing! 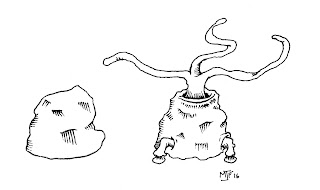 So, I made a couple of posts that were advertising. Time to offer a monster.I sketched a little picture of the Grumprock that's basically "before and after."


GRUMPROCK
The grumprock is a creature of the elemental plane of earth, but they are encountered on the material planes more frequently than other elementals since they form as polyps on large rock formations, eventually breaking away and wandering about, although they never go fer from their parent rock formation. They resemble ordinary boulders when they are inactive, which is most of the time. However, if they are hungry or disturbed, the top of the grumprock opens to reveal the creature's interior, which is much like that of a mollusk. The grumprock's interior extrudes a very long, triple-tongue that it uses to grab its prey and smash them around until the shells are broken and the creature is dead. Each of the tongues attacks independently, and if it hits, it winds around the victim. Anyone entrapped in this way can attempt to break free each round by making a saving throw just after being smashed. Smashing begins on the round after the victim is enfolded in the tongue, and causes 1d6 points of damage automatically.
Grumprocks are always surrounded by a pungent smell, which is rust monster pheromones. Rust monsters are attracted to the grumpocks by this smell, enfolded in the tongue, smashed open, and eaten. The area around a grumprock may be marked by the smashed shells of rust monsters if the grumprock has remained in the same place for long enough.

Type GRAND-25 at checkout to get the 25% discount -- most products on the site are included in the sale.


Joesky Tax: Does anyone still pay the Joesky tax? It's the premise that if you're making a non-gaming post, you should include some content with it. I don't have content, but I have a really good link to Greg Farrell's NPC generator for Swords & Wizardry, also usable with pretty much any of the old-school editions. Take a look!

So, pretty soon we're going to be starting a "Deal of the Day" program at Tabletop Library. And this is a picture of my Leonberger puppy, Milo. Chime in if you think we should use his picture for the "Deal of the Day" page and call it Milo's Daily Deal. Chewing on that grass stalk, he looks like he's all ready to wheel and deal for the big bucks.

The other option is probably a picture of a merchant.....

Name of the Rose (or, of the blog) So it might not be visible to everyone, but I've changed the name of my blog from Mythmere's Blog to Finch's Folio. The reason is that some of my RPG interests have shifted a bit from just writing about gaming to writing about the RPG market in general. Partly that's because I got fascinated with the whole "guild" approach going on at OneBookShelf ... I'm quite against it, by the way, but that's another story.

Anyway, I'm going to be writing on a different mix of topics than before, although still lots of purely gaming stuff. I got affiliated with Tabletop Library over the course of the last couple of months (again, an indirect result of the restrictive "Guild" system), so I'll have various comments on that.

In the meantime, for any readers who have their own blogs, take a look at the affiliate program at TTL and see if you'd like to participate. The link to set up an affiliate account (if you're already registered) is https://tabletoplibrary.com/affiliate-area/ (or HERE). If you're not registered, the home page is tabletoplibrary.com.